In total, the MDBs committed over $66 million USD to climate finance in 2020, split between mitigation finance and adaptation finance. 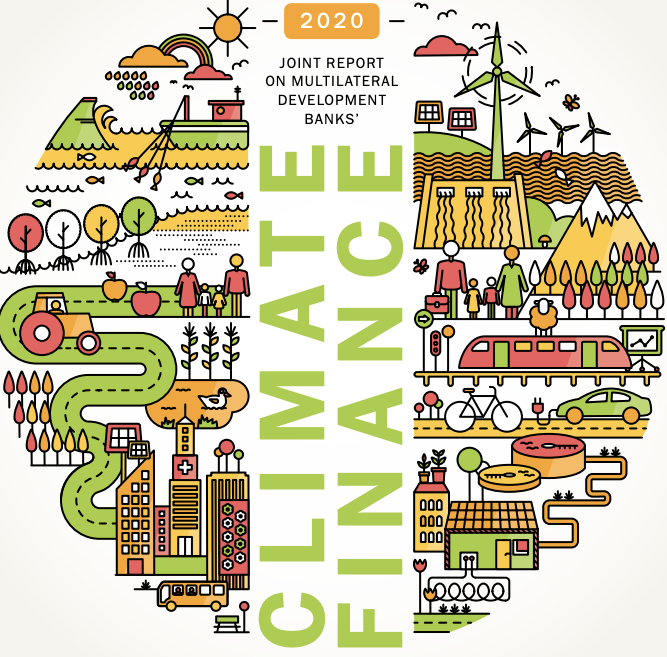 The data and statistics presented in this year’s report result from the uniform application of the methodologies developed jointly by the MDBs for their annual commitments.

In this report, the term “MDB climate finance” refers to the financial resources (from own accounts and MDB-managed external resources) committed by MDBs to development operations and components thereof which enable activities that mitigate climate change and support adaptation to climate change.

The term “climate co-finance” refers to the volume of financial resources invested by other public and private external parties alongside MDBs for climate mitigation and adaptation activities. The MDBs have reported jointly on climate finance since the first edition in 2012, which reported figures for 2011, and have added joint reporting on climate co-finance since the 2015 edition.

The MDBs’ methodologies for tracking climate mitigation finance align with the Common Principles for Climate Change Mitigation Finance Tracking that the MDBs and the IDFC jointly agreed and first published in March 2015. At COP24 in 2018, they announced a plan to work jointly to review and strengthen the Common Principles for Climate Mitigation Finance Tracking. In contrast to adaptation finance, mitigation finance is estimated in accordance with the joint MDB methodology for tracking climate mitigation finance, which is based on a list of activities in sectors and sub-sectors – according to each MDB’s operational practice – that reduce greenhouse gas emissions and are compatible with low-emission development. In 2020, the MDBs finalized their review of the methodology for tracking mitigation climate finance and commenced tracking using the new methodology on 1 January 2021 for the AfDB, ADB, AIIB, EBRD, EIB, IDBG, IsDB and NDB and on 1 July 2021 for the WBG, to coincide with each institution’s new fiscal year. The new version of the methodology will include a more granular breakdown of types of eligible activity, clear criteria that must be met and additional guidance to help interpretation. Climate change mitigation finance in 2020 totaled $49 million, of which 49 per cent was directed at low-income and middle-income economies.

In addition to reporting on mitigation and adaptation finance, some MDBs report on volumes of climate finance that have dual, simultaneous benefits: reducing GHGs and promoting adaptation to climate change. In 2020, the AIIB, EBRD and IDBG reported a total of $795 million for dual-benefit projects.

In 2020, MDBs reported $46 million of their climate finance as being for public entities and $19 million for private entities.

The NDB applied the joint MDB methodologies for tracking climate mitigation and adaptation finance to its 2020 projects financed from its own account, including sovereign-backed and non-sovereign-backed financing.

In 2020, NDB committed a total of $816 million in climate finance, all of which was directed to middle-income economies. Climate finance accounted for approximately 19 per cent of the NDB’s total approved financing excluding the NDB’s support in response to the Covid-19 pandemic. All of the committed climate finance was dedicated to climate mitigation activities. On a separate note, the NDB approved about $6 billion in emergency assistance to facilitate countries’ fight against the pandemic. The NDB intends to report on the details of its climate financing (for example, by region, sector and instrument) in future editions of the Joint Report, as the NDB extends its application of the joint MDB methodologies.