Community Gardens for Food Security During the Pandemic 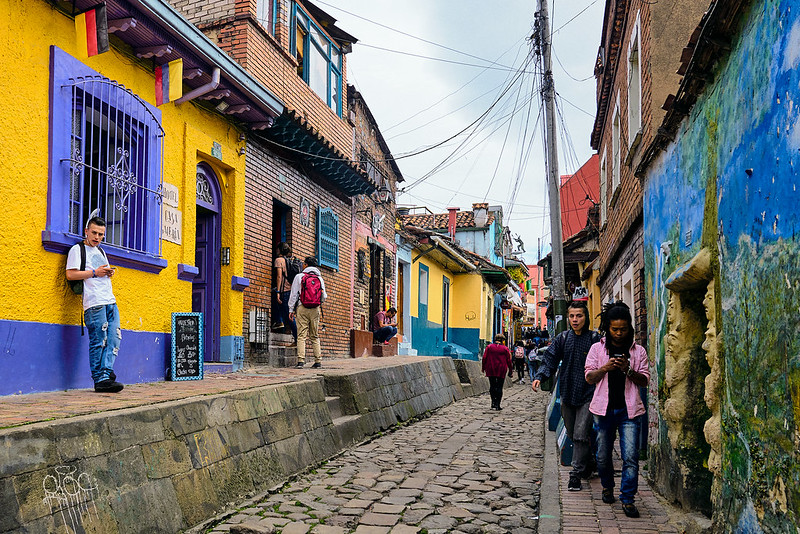 This case study was originally published by the Climate Development Knowledge Network and the International Centre for Climate Change and Development for the Global Resilience Partnership. View the original publication here.

As Latin American cities like Bogota continue to grow, rapidly urbanizing peripheral areas present many risks, due to inadequate provision of basic services. Informal settlements in such areas have also received the highest numbers of displaced people. El Alto Fucha, located in the highest part of the mountains of the town of San Cristóbal Sur, Bogota is such a settlement, with a population of 5,200, distributed across seven neighborhoods.

Colombia is uniquely vulnerable to climate change, as most of its population is settled in elevated areas prone to water shortages, flooding and landslides. Studies show that, with increases in sea level and floods, many key settlements and economic activities may be affected. Heavy rainfall and consequent landslides in November 2020 in north-western Colombia led to 18 fatalities and many injuries. Increases in rainfall and annual mean temperature also cause several challenges for agriculture, particularly in informal settlements, due to a lack of resources and knowledge about how to adapt.

Huertopía Collective is a community-based organisation that has been working for seven years to assist people with gardening through the provision of technical advice, seeds and seedlings. It focuses on agro-ecological gardens in the eastern hills of Bogota. Jhody Katherine Sánchez Beltrán is the founder of Huertopia Collective.

“What we do is not only urban agro-ecology, but it also has three dimensions: environmental, political and economic dimensions. Planting forest species reduce landslides at the edge of the river, and we also have experience in ecological restoration,” she begins.

The Effects of COVID-19 on El Alto Fucha

The people of Alto Fucha started hearing about the pandemic from late December 2019 through social networks, but the lockdown was decreed in Colombia from the middle of March 2020.

“The community was greatly affected by the economic stagnation. Neither the national or local government guaranteed food and free public services, during quarantine. If people cannot access a job, then what can they live on?” she says.

Many informal workers are not affiliated with any companies but who work on the street, on a day-to-day basis, so there was a great shortage of food among them. Access to information was another issue – people did not really know what they were facing and there were many myths around,” she adds.

To safeguard the community from the spread of coronavirus, Jhody and her team initiated a hygiene campaign, through which they inform people of the right way of wearing masks, washing hands and disinfecting things.

“While running the campaign, we saw that people were starving. But our community had the capacity to sow, for urban agriculture. Moreover, we also work in a network, so the groups are already organized,” she says.

So, they decided to turn all their efforts towards the creation of community gardens and family gardens in vacant plots. Groups of settlers living close by each other were organized in many parts of the territory. They arranged – on a case-by-case basis – adopted lands, seed exchanges and shared materials to enable them to work on gardens.

Huertopia also distributed seeds and materials to people in need. “The community gardening gave us freedom in a way. It allowed us to relate with neighbors and strengthen the network. Now we have 25-30 gardens in our community,” she proudly shares.

Another initiative that Huertopia started in the Alto Fucha during lockdown is the Solidarity Economy Network. Ninety-five percent of the network is made up of women of the locality who met during the lockdown to disseminate their knowledge, skill sets and products while maintaining hygiene protocols. Their activities not only helped increase the sale of products but also encouraged others to adopt the skills and generate their income.

“At that time, women became instrumental because almost all men lost their jobs and women who were the ones who always stayed at home with their knowledge are now earning money,” she adds.

“The Solidarity Economy Network, although it has a great potential, due to the emergency and the material conditions at this time finds it difficult to take all the steps and organize dissemination sessions,” she says.

“We feel that we are in charge of a responsibility that the State should assume. There is an institutional barrier that sometimes hinders things, since we do it from the community, they see everything as a problem. There is no dialogue from the district government with us,” she adds.

Furthermore, to sabotage our progress, some local government representatives spread a rumor that young boys consume drugs. They also sometimes destroy the garden door or forcefully take away the harvest.

Nonetheless, Jhody and her team members are not losing hope; rather, they are asking for assistance from government and non-government organizations to support their initiative. “The local government has a responsibility to manage risks, and we feel that the agro-ecological gardens have the possibility of reducing climate-related risks for local people.” They call for cooperation from the local government with these community-driven measures to respond to climate emergencies.

“We have received other types of support such as, from the Institute of Housing and Urban Development Studies (IHS), Rotterdam that has made possible some resources to strengthen the network through training workshops. Perhaps the support of other institutions can help us make durable fences and a door of good material. These are the kinds of materials that are not so easily obtained from self-management,” she proposes.

“It is possible to live under another economic system different from capitalism, which is supported by solidarity and cooperation. It requires a close relationship between people that they do not have to travel very far to buy food, that any neighbor close to you can solve the problem you are having,” she concludes.

For the residents of Alto Fucha, which brings together seven informal settlements in Bogotá, their territory is their life and soul. Located at the entrance to a National Park, they have developed a strong relationship with the river, the hills, and the vegetation; Jhody and Huertopía’s experience is supported by the need to survive.

The distance to the economic center of the city, the lack of transportation, the lack of employment opportunities among others, motivated those years ago, mainly women, to propose alternatives linked to the territory. Family and community gardens have been extended during the pandemic, and it has allowed them to strengthen solidarity networks for the exchange of seeds, food, and experiences, in short, mobilizing social capital to solve access to food not only for members and their families but for all the neighbors.

The sustainability of the initiative requires the mobilization of local and national actors, but fundamentally support for women in the communities because they are multipliers of practices from everyday life. Undoubtedly, a first step is to support efforts to document and systemize their experience and to recognize the needs of solidarity networks to access the basics.

María Eugenia Torrico Ferrufino, is a Bolivian sociologist and reconciliation lawyer. She technically assists the grassroots community organization “Tejiendo Ciudades” in her country and promotes the exchange process between the women of informal settlements in Bolivia and Colombia.

Jhody Katherine Sánchez Beltrán, is an environmental caretaker and graduate in biology from the Universidad Pedagógica Nacional de Colombia. She is also the founder of the Huertopía collective, focused on community work from agro-ecological gardens in the eastern hills of Bogotá, Colombia where she also lives.