What do Somali pastoralists and dairy farmers think of camel leasing? 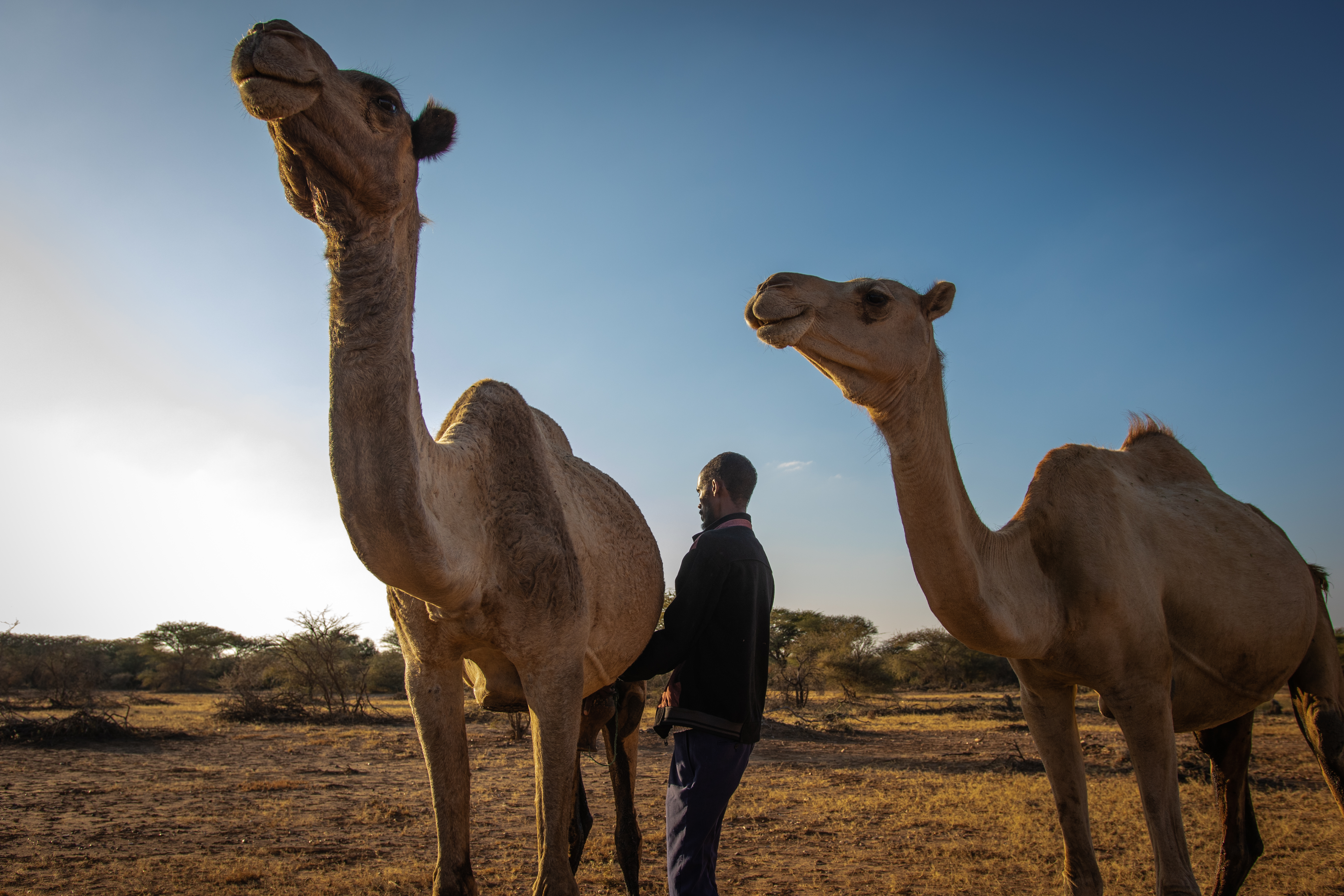 The Feed the Future Somalia Camel Leasing to Impact Resilience Activity was a multi-year mixed methods research study funded by USAID and implemented by RTI International. Part of Feed the Future, the U.S. Government’s global hunger and food security initiative, the study looked at the potential impacts of camel leasing on the resilience and well-being of Somali camel-herding pastoralists, pastoralist communities, and camel milk dairies.

This series of case studies highlights the experiences of several pastoralists and dairies engaged in camel leasing. These individuals’ experiences illustrate some of the outcomes of camel leasing arrangements.

Mr. Abdi Haaruun Guure and his family live near Salahlay, about 90 km from Hargeisa, the capital of Somaliland and the biggest city in the region. He owns and operates a small family farm and tends a herd of 40 camels with the support of his wife, seven children, daughter-in-law, and two grandchildren. It is a second-generation farm established by his father, though the land and the lineage of his camel herd go back generations.

Mr. Guure shared that tending camels is a difficult way to make a living. “You don’t see your home for 12 months,” with periods of time in which no one is buying milk and there are no financial benefits. One year during a drought, Mr. Gurre’s camels were not able to produce enough milk to feed their own calves. He and his family had to roam far with their herd in search of water and fodder, taking shelter at night and at times going days without food as he searched for his camels, which had wandered off. Now, even when there is no drought and the situation is better, he still struggles to sell his milk due to competition from large dairies, decreasing milk prices and challenges getting his milk to market.

In 2019, Mr. Guure began leasing his camels. He was the first in his community to explore the practice after hearing about it from another pastoralist. When a small dairy opened up on the neighboring farm, he approached the dairy owner and was told, “If your camel yields a lot of milk, then I will lease your camels.” They negotiated a price, reached an agreement and began a leasing arrangement. Since it was a neighboring farm, Mr. Guure was able to keep an eye on his camels, making sure they were treated well and not over-milked, which was a major concern of his family. He considered the experience a great success that enabled him to shift from “paying for the costs [of maintaining a camel] to getting a monthly fee and using it to resolve our challenges.” In the end, camel leasing provided him enough money to “dig a well, pay for the children’s education, support the livelihood of the family, and [obtain] other necessities the family needed.”

Mr. Guure tried to start his own small dairy by leasing camels from other pastoralists, but found that it was too challenging, particularly the logistics of getting a truck to pick up and deliver the milk. He was also unable to finalize any leasing arrangements with other pastoralists, as they could not agree on the details of the lease, such as appropriate compensation. Even the lease he held with the neighboring dairy came to an end for a similar reason; the dairy owner returned the camel, stating that he could not handle the cost because the lease payment was too high. This is the struggle across his community, he said, with many pastoralists interested in beginning to lease but unable to find dairies that can compensate them at agreeable rates.

Mr. Guure is eager to get back into camel leasing and calls it “a good practice.” He thinks that when “both parties reach an agreement, it will be unstoppable.” In the meantime, Mr. Guure and his family will continue to maintain their farm and herd while focusing on other resilience capacities to protect themselves from future droughts or other unanticipated shocks. They are already using their new well to maintain water, growing and storing fodder for future years, keeping their herd penned in and close to home to focus on the farm, and keeping a traditional diet for the camels to ensure the highest-quality milk that demands the best prices possible.

Read more case studies and learn more about the participants in the Feed the Future Somalia Camel Leasing to Impact Resilience Activity via the PDF on the left-hand side of your screen.